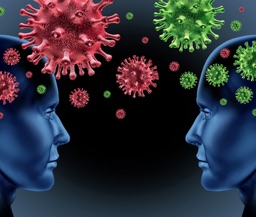 Integrating major course ideas into coherent themes is a big deal for me. I introduced the topic here. One that I really enjoy is  teaching biology with the flu virus (follow the link for resources associated with discussion below).  Briefly, influenza attaches to the surface of your cells through specific interactions, is internalized, and then all hell breaks loose when you pump protons into the resulting vesicle. You’re trying to digest it. Its waiting for a sign it’s inside.

The key idea is that the virus’ strategy is a total recap of the Trojan Horse. It ‘purposefully’ gets itself into the cells’ digestive stream. Initial contact is between a viral protein, hemagglutinin, and sialic acid residues decorating proteins on the surface of some cells. Bound virus induces the cell’s phagocytosis pathway, and then (in the view of the cell) the internal pH is lowered in order to denature and digest any foreign attackers. However, the lowered pH triggers a conformational change (and an amazing one!) in the virus, create a fusion-favoring ‘harpoon’ that combines the VIRUS enclosing membrane with that of the vesicle containing it.

Teaching biology with the flu provides a quick opportunity to explain something of the eukaryotic cell’s logical organization into compartments. Walling off different places just makes sense; consider your bathroom without them! And there is also a direct analogy with your stomach–as an ORGANISM, you also use lowered pH and enzymes to render anything you take in small and harmless.

This fusion event renders the INSIDE of the virus particle continuous with the cell’s cytoplasm! Bang, the genetic material of the virus has now evaded destruction and is exposed to the translational machinery of the cell! From here, the usual viral strategy of directing the ‘stupid’ machinery of your cells to make its products rather than yours.

Upon exodus, the virus own strategy works against it–it is in danger of sticking to the surface of the just-infected cell that it is trying to depart. What to do? Why, cut off the sugar residues that form its attachment site, thus rendering the cell surface ‘not-sticky’ and freeing the virus to find new host cells. A viral protein, neuraminidase, ‘clips off’ the sialic acid chains to which the virus’ hemagglutinin would otherwise bind.

The story gets better. Tamiflu is a competitive inhibitor of neuraminidase (theraflu binds to the active site of the neuraminidase enzyme, thus keeping it busy and unable to cleave the sialic acid residues). The idea is that Tamiflu therefore interferes with the virus’ ability to boldly go anywhere but where it has already been. Although recently questions have been raised about the efficacy of the drug, several governments have stockpiles huge stockpiles held in case of an outbreak of a particularly nasty flu variant.

There are also fascinating evolutionary implications, as well as discussions of the immune system. The ‘new’ flu variants that arise every year are often due to changes in the surface of the hemagglutinin protein, thus presenting a ‘new face’ that your immune system must learn. On another front, there are specific amino acid changes that decrease the affinity of neuraminidase for Tamiflu, thus restoring its function.