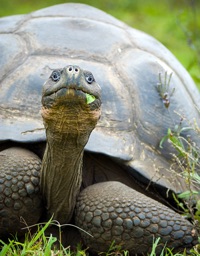 Many institutions divide Introductory Biology into Cell/Molecular and Ecology/Evolution semesters. There is some sense to this, in that one scale can be seen as cellular and smaller, the other organismal and larger. However, failing to weave the influences, evidences and implications of evolution into the cell-molecular semester wastes an opportunity to show students through our teaching of these topics how central these ideas are. Further, there are a wonderful molecular examples that represent powerful, approachable proofs and demonstrate to students what they can do if they pick up these tools.

With a topic as broad as Evolution in Introductory Biology, I’m going to be a disperse in my discussion, though the curriculum I teach has what I think is a reasonably cohesive presentation for students. Many of the elements I use are dealt with in other blog posts or in materials I have posted/hope to post from my Lecture Components (disclaimer: because of copyright challenges, I’m going to have to core out textbook figures from PowerPoints, and replacing them is sloooow work).

Overview: method to the madness

I’ll start with negation: I think integration doesn’t work when the ‘unit’ on evolution is a unit on evolution. We need to integrate evolutionary thinking into what we’re already working to teach. Since evolutionary processes gave rise to, oh, pretty much everything we share with students, the challenge is more one of identifying cases that are interesting and apparent than of going to exotic depths to fit something in. While there are tons of fun things to discuss that fit into that ‘other semester’ of Introductory Biology, I don’t think there’s a need to poach, and I think it can ring hollow: “If this is so true and so central, why don’t we talk about cells and molecules in this context?”. Further, one of the great straw men of those seeking to deny evolution through confusion are the arguments about ‘irreducible complexity’ or Answers in Genesis’ claims about “changes within kinds are OK, but ‘molecules to man’ is a different class of thing.”

So my goal will be identifying instances where evolutionary evidence and thinking can be gracefully integrated with general topics in Cell/Molecular introductory biology (that I agree with 😛 ). 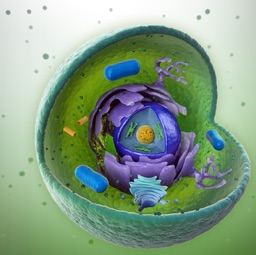 I love the Endosymbiont theory. It’s an opportunity to accomplish so many things in one place, so is a great way to deliver on my goal of using Themes to unite Intro Bio teaching. I use it as part of a discussion on prokaryotes vs. eukaryotes and as a lead-in to a discussion of organelles, because the origins of mitochondria and chloroplasts provide an explanation for their membrane-bound structure (the outermost membrane, that is). And Lynn Margulis is credited for origination of the theory, so it’s an opportunity to quietly point out that women in science is a thing. But for this post, the Big Deal is how the argument for the theory is made. I love being able to defend the claim on the basis of differing branches of evidence, allowing me to point out what a scientific theory is, as opposed to a hypothesis.

I lead with a cartoon about phagocytosis. Without going over-deep with students at what is (for me) an early part of the semester, I generally introduce the ideas as categories: “like-prokaryote” and “like eukaryote”. Note that as this proceeds, it’s an opportunity to casually keep referring to some structural elements of the mitochondria of eukaryotic cells:

The evolutionary focus is one that I’ll weave as a theme throughout the course: it’s easier to copy (or in this case, flat out steal ) than to create-from-scratch. We’ll be re-visiting this idea when we look at DNA and at the globin and opsin gene families (see below). But note how there is an opportunity to integrate domains of life (I don’t focus much on archaea vs. bacteria here [except that one is the engulfer; one the engulfee!], but we cover prokaryote vs. eukaryote nicely), theory vs. hypothesis, organelles, membranes, forms of evidence, and the Endosymbiont theory itself, which is often on to-do lists.

Apropos of nothing above, note that there is currently a challenge to the “the archaea tried to eat a prokaryote but kept it as an organelle” version that proposes that the prokaryote was a parasite instead. Of course, the evidence is sequence alignments and tree-thinking :-).

Got globin? alpha, beta, gamma, other, and dead globin genes

A huge component of the lab arm that accompanies the Intro Bio course I’ve been involved in is an exploration of structure-function of hemoglobin. Besides the blatant homology of myoglobin and alpha and beta hemoglobin (not dealt with very explicitly in the tutorial, but see this website from Davidson) the latter tutorial ‘pages’ take up the differences between fetal (gamma) hemoglobin, including what one of the critical amino acid changes is and how this enables us to be mammals–letting the fetus (a.k.a. parasite within) ‘steal’ oxygen from its same-species (and basically same genotype) mother.

Of course, the greatest way to ‘knit’ evolutionary aspects into hemoglobin discussions and to build bridges between the two semesters of Intro Bio is sickle cell anemia (see appropriate links here). The fact that sickle cell anemia alleles provide resistance to malaria explains the prevalence of these alleles in populations where malaria has historically been a horrific killer. Rather than going into further depth here, I’ll link to my Hemoglobin blog post and try to supplement it ‘someday’ with more on malaria, hemoglobinopathies, genetic linkage (it’s how we know sickle cell anemia arose several times independently; this is challenging to show bc it’s always the same mutation!). You can also read Sean Carroll’s wonderful ‘Making of the Fittest.’

The making of DNA: better than but derived from RNA

I have an existing lecture compilation on this deep, wonderful topic so I’ll bare bones it here. Briefly put, a ton of evidence indicates that ‘RNA came first,’ but RNA has several Achille’s heels. While I hope we never settle for ‘memorize these differences’, the full discussion can take a couple thoughtful class periods to navigate. I think it’s worth it, because they’re so darn readily understood if explained well! The 2’OH position is dangerous (in a way that is related to the mechanisms of ATPases!), but the fix takes some hard-won reducing power. The reason for the difference between uracil and thymine originates with… the stupidity of using cytosine?!? Briefly, cytosine reacts with water to yield uracil… which is terribly ‘misleading’ in an informational system based on Ade, Cyt, Gua, Ura. The ‘obvious’ solution is to replace cytosine; but that’s often not how evolutionary processes work–a sufficient ‘findable’ solution, however ugly (and boy, is this one ugly–se the lecture compilation, but it entails an energetically expensive redox reaction [add -CH3] on EVERY ‘uracil’ to create Thy, de-energizing accidentally created dUTP, stripping dUTP out of DNA [which still occurs bc the chemical change Cyt => Ura still happens!] etc. The very ugliness of the ‘fix’ that is DNA lets us clearly argue that evolution is not some ‘magic wand’ that creates ‘best solutions’, lets us argue against ‘foresight’ in evolution, and lets students think deeply about ‘accessible solutions’ in a concrete way.

Overall, therefore, I think this challenging discussion is well worthwhile, and it leaves students with an understanding of WHY DNA contains 2′ -H instead of -OH and employs thymine instead of uracil.

This is a neat story (actually, a series of related ones) that very much fits into an Intro Bio course that has an emphasis on molecular understanding. You can use thinkBio’s resources (rather, the current state of sharing them 🙂 ). Fantastic coverage of some of the data and some of the stories can be found in Sean Carroll’s ‘Making of the Fittest‘ (which provides a number of cases that would fit right into this post, and does a great job of collating useful resources). Since opsin is worthy of (and will someday receive) its own blog post, I’ll bullet my way through this:

Jeepers, creepers, where’d you get those peepers?

Currently, we only know of a single origin of the alleles for blue eyes. How do we know this? Because all blue-eyed people (in the not-exhaustive study that was done; see previous link in this paragraph) have the exact same mutation. Given that we expect a large ‘target size’ (there should be many ways to knock out melanin synthesis in the eye), it is conspicuous that everybody has the same one. This is a fun classroom discussion, because it’s about the students themselves. And you get to call them mutants :-). You can also discuss sexual selection (I use data from dating sites that indicates a disproportionate number of people are seeking blue-eyed mates) and how it overrides potential deleterious effects (blue-eyed people are more likely to suffer eye damage over time). If desired, this whole discussion can be tied into melanin production (which is about both an enzyme pathway and vesicles/cell biology).

Another favorite story of mine, which currently has lecture resources, but which deserves more from this site. This story  ties in with the tale of the origin of blue eyes, since it’s a counter-case: multiple origins of the trait as evidenced by different individuals bearing different alleles (DNA sequences). You can also link to a discussion of the lac operon (if that’s part of your curriculum): just as E. coli should not waste energy produce lac-digesting machinery, (most) mammals don’t bother with lactose after infancy (lactose intolerance)… All this changed when we domesticated other mammals and (for whatever reason!) tried their milk. Portable dairies (and butcher shops) were clearly a major innovation, as evidence shows ‘lactase persistence’ (production of lactose-digesting enzymes into adulthood) had multiple origins, likely correlated with domestication of camels in some cases, cows in others (again, see link for resources).

The theme of ‘Deduction of evolutionary history through sequence homology‘ makes for an Honors course that goes as follows:

When I am braver…

I’ll open up the comments, because I think this topic is incredibly important, and we have just as many opportunities to discuss evolution in introductory biology, its footprints, mechanisms, and processes during the Cell/Molecular semester of IntroBio as colleagues do in the Evo/Eco semester.

One thought on “Evolution in Introductory biology: cell/molecular semester”