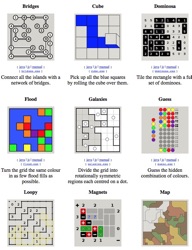 To my mind, there are two phases to a lot of classical ‘logic puzzles’. Take Sudoku (spoiler alert! Problem solving strategies already developed & revealed 🙁 ), for example. There is an initial phase where you figure out how to win; then you can play an infinite number of ‘success oriented’ games where you implement  the strategies you developed initially, but rarely or never develop more. I think the initial phase holds the rich opportunities for giving folks an opportunity to develop their problem-solving skills in a meta-cognitive way. So, alongside Petals around the Rose, Bongard Problems, and PatternMaster, I’m linking to Simon Tatham’s Puzzle Collection because it hosts a variety of different problems. Not with the goal of allowing everyone an opportunity to play the one they like, but to explore and learn the ‘tricks’ of  some that are unfamiliar.

In approaching a novel problem, the fertile ground for real thinking about problem solving strategies is available. I think this is ideally approached with pen-and-paper and a prayer that students are disciplined in observing their learning. I have had difficulty in assigning tasks like this because students are tightly focused on what they did rather than identifying conceptual problem solving strategies. For this reason, more structured requirements than “What did you learn from developing a solution” are likely needed. Questions such as “List the ‘a-ha’ moments you had where you made a quantum, permanent advance in your approach,” “What ‘tricks’ did you develop to identify the easiest ‘starting place’ for attacking your puzzle?” and “What analysis lead you to better approaches (i.e. what CAUSED your novel idea(s)?”

As an example to students, here is a link to a description of identifying the input an artificial intelligence would need for MineSweeper (the classic game numbers are revealed in a grid, identifying the number of adjacent mines/bombs; it appears in the linked collection as ‘Mines’).

Because of either familiarity (if one already knows a bunch of rote strategies, attempts to develop strategies are moot) or because the game doesn’t seem to send itself as well to the goals of this assignment, my colleague Emily Dykstra and I disallow the following list when giving the assignment (this likely doesn’t  include all the ‘undesirables’)

Black box (FYI, a game with some more variants is ThinkBio’s ‘Quantum Mine‘; still not a great selection :-))
Guess
Keen
Mines
Pegs
Solo

In submitting the exercise, students will generally be required to refer to a specific configuration or situation; for this reason, we suggest including screenshots in their write-up.