Before we design courses, textbooks, assessments, labs, we need to determine what is important to teach 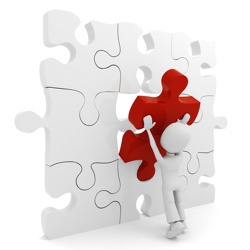 in Introductory Biology. I think we’ve failed to do that, or at the very least confused concepts with content. Part of the problem is historical–textbooks are a product of inertia, each new one modeled on the ones that came before rather than initiated de novo to reflect principles in biology or pedagogy. Secondarily, I think a lot of effort in revamping biology curricula is being driven by older efforts in Chemistry and Physics, where a lot of the critical material is more operational and less conceptual. I’m writing this post to lay out one possible schema.

Recently, in seeking after organizing principles for a semester, I re-discovered the ‘definition of life’ set. While I don’t like this as an exercise (some of the categories seem hacked in to exclude fire and rocks), the canonical set does strike me as an interesting basis for structuring a discussion on the key concepts of biology. I once showed a series of images/movies and asked what was it about each that lead them to believe they were looking at something living. Shown were the knee-jerk reflex, cell engulfing another, etc. Most recently, I told students they were on Mars and shouted “It’s alive” and asked them what they might have observed to lead to this conclusion. While this is more a work in progress than what I commonly post, I’ve begun to develop the following list:

While not part of the definition of life, I believe an overarching goal of Introductory Biology must be to encourage and enable students to ‘think like a molecule’. Of course, one key component of that is not thinking. The limitations are the name of the game. There are only a very small number of ‘kinds’ of molecular surface–neutral, positive, negative, H-bonding… And interactions of such kinds define the triggers and ‘senses’ of molecules. I’m fond of saying it’s a Braille world–if nothing bumps into a molecule, it can have no awareness and undergo no change.

Like many of these, it’s hard to neatly define this, but it harkens back to Paley’s watch.  Looking at a eukaryotic cell, we see organized compartments segregating materials and activities. Organisms and cells are often polar, both in construction and behavior. And as one goes into finer and finer detail, organization persists–DNA is packaged tightly, chromosomes do choreographed dances, mitochondria and chloroplasts have wondrously organized membrane systems to do their work.

In the organization module, the idea of boundaries is important. And in a watery world, the boundaries must be something that can contain and confine water–they must be ‘anti-water’. Which is not a bad substitute for the term “hydrophobic”, when you get right down to it. From this module, then, the construction and roles of membranes and organelles flows.

In terms of ‘action’, I go straight to ‘doing the business of the cell’. Because of the structure of the course I taught, this entailed a lecture arm focused on ATPase activity in lecture (because the mechanism is straightforward, and because we’ll be mentioning ATP in the context of energy, phosphorylation & regulation, and half the enzymes that do anything) and hemglobin in labs.

The motion aspect  is the most obvious to most of us, though it really doesn’t get much attention in my own course since I’m generally dealing with the sub cellular level. While it is a characteristic of flagella, the F1-F0 ATPase, and the motors that move along the actin and tubulin filament systems, only the ATPase makes it into the pantheon of ‘things that I will actually carve out a full lecture to understand.”

Somewhere at the base of all this action must be a way of fueling it. The fight against entropy requires ceaseless investment of energy. To build requires the manufacture of parts and the power to assemble them. Somehow, fuel must be refined from whatever form the environment presents into an easily dispensed, easily consumed format: ATP.

As I’ve written in another post, this one can be very challenging to ‘sell’ to students while accompanying it with understanding. ‘Genetic information’ is an accurate term, but also so buzzed-up that it’s hard to hear it and listen at the same time. Further complicating the issue is the challenge of identifying what ‘information’ is, what what the information ‘means’ in a cellular context. That’s why I strongly favor introducing the Central Dogma ‘out of sequence’. Start with proteins: they ‘do’ things, and the things they do are familiar to students at any level–carry oxygen in the blood, get the energy out of sugars, re-package the ‘energy currency of the cell’, move foods into cells and poisons out, tell us that we have seen or smelled something…

In my view, then, we should start a molecular view of the cell with molecules that are easy to understand… and then present the informational molecules as the instructions for making them, accompanied by the instructions for how, where, when and how much of the (generally) protein products to make. In this context, the ‘information’ has an easily identified purpose–we have set up the need (and niche) for it when we explained the machines that required making. So in my own classroom, I try to dispense with the term ‘information’ and focus hard on ‘instructions’. From there, it’s on to how the structure of the bases ‘holds’ and ‘dispenses’ instructions–through precise, one-to-one pairing interactions.

Why do we teach the lac operon? Should we teach the lac operon? I think there’s a strong and clear ‘yes’ for this one. If you watch a white blood cell hunting or a puppy meeting itself in a mirror that stimulus-response is a big signature of living things. Evolution has refined a set of fantastic computing machines. In the case of multicellular organisms, the instructions unfold into a 3-dimensional entity, consisting of many complex parts. Development involves information about time and about the ‘sensation’ of neighbors. Cells ‘converse’ to instruct one another, to determine their environment.

Even once a bio-machine (be it a protein, a cell, or an organism) is assembled and functioning at ‘steady state’, constant input about the environment must be welcomed, interpreted, and acted upon. The lac operon is a wonderful example of this. An E. coli cell needs to make optimal decisions about eating, because it is in constant competition with its brethren (sistren?). To make good decisions about lactose, it needs to know 1) is there any? and 2) is there better food (glucose) that should be eaten first? While currently under re-examination, the old model of functional implementation is delightful: #1 is mediated through repressor binding of lactose (allolactose for the sticklers) and #2 through CAP via cAMP. Two pieces of information, two proteins, all synthesized into ‘correct’ action on a stretch of DNA adjoining that which much be controlled.

Unfortunately, this theoretical organization doesn’t necessarily dovetail into a curriculum. Energetics is large, complex, and entails both ‘eating sugar’ and ‘making it’ via photosynthesis. These processes share too much in common to be treated separately. But in my view, this nonetheless constitutes a ‘bubble’ that must be pulled out of the chain above so the existence of proteins can be linked to the instructions for them… and the instructions deserve careful exploration before their regulation!

So… a work in progress. But I think it’s terribly important that before designing a course or textbook to teach the key concepts in biology, we determine what they are… and how they relate to each other!