We use a several terms in IntroBio that all mean the same thing, but may mean little to students in the classroom–‘binding’, ‘specific interaction’, ‘interacts with’, ‘recognizes’. This is particularly dangerous with ‘recognizes’, because newcomers can envision a police line-up: targets appear and we visually choose one. Alternatively, we risk students imagining a somewhat mystical, or at least poorly-defined ‘way’ that molecules have that is beyond their ken. Nothing could be further from the truth; in some ways one of the easiest things to understand is why two molecules ‘stick to’ one another and overcome the force of Brownian motion, at least for a little while.

The molecular world is a braille world

One of the Big Ideas we often emphasize is that a good theory or model simplifies the world–by understanding a given principle or point of view, everything becomes easier. The Periodic Table is a great example of this–while there are an infinite number of compounds and a large number of elements, there are only a few ‘ways to be’ in terms of elements. The same is true for molecular interactions–each cell contains millions of molecules and thousands of kinds of molecules… but there are only four or five kinds of interactions between them. And ‘communication’ at the molecular level is (almost) always about direct physical contact. Two surfaces are either ‘compatible’ or incompatible; if compatible, we know it because they ‘bind’. What determines this?

The five-(ish) kinds of biological surface

The Big Idea is that there are only so many ways two molecules can ‘touch’ each other. Unfortunately, we call them all ‘bonds’; here’s a brief review.

This one’s easy and generally familiar from chemistry–NaCl (sodium chloride; table salt) in water is Na+ and Cl-; the positive and negative charges like each other, and that’s that. In proteins, we see the amino acids lysine and arginine with positive charges ‘drawn to’ the negative sidechains of aspartic and glutamic acids. Histidine also shows up in lists as ‘positive’, though it has a probability of being positively charged that is influenced by pH.

One of the Big Chemical Ideas young biologists need to draw from the Periodic Table is electronegativity, the ‘pull’ an atom has electrons (I prefer ‘electron greed’). The electronegativities (electron desires) of sodium and chlorine are badly mismatched, with the result that chlorine flat out takes electrons to become the Cl- alluded to above, and sodium is left without one of the electrons it had as an element, thus Na+. All manner of intermediate possibilities occur, notably the ‘pretty electronegative’ (greedy) oxygen and nitrogen vs. the not-overly-electronegative hydrogen. This inequality is reflected in unequal electron sharing, and thus a covalent bond but with the nitrogen/oxygen atom partially negative because of ‘extra electron time’ and the proton (hydrogen atom) correspondingly negative.

This gives rise to the special case of great relevance to biology–hydrogen bonds. Because hydrogen is itself special (is it a proton? Is it a hydrogen nucleus? It runs around naked without electrons!), hydrogen bonds are special too. Their weakness arises not only from the lack of full-blown charges, but they’re very picky about both distance and angle.

When sharing is equal (or relatively so, such as between carbon and hydrogen atoms) no partial charges are generated… to the disgust of water molecules which are nothing but partial charges. The lack of ‘interesting’ offerings means there’s nothing for water molecules to ‘talk to’. After all, water is nothing but the partial (+) of its hydrogens and the partial (-) of its free electron pairs. This incompatibility creates real problems in terms of interactivity (binding)… problems that are best solved by the uncharged (= non-polar; = hydrophobic) parts ending up together, leaving the water free to interact with more fruitful partners… a phenomenon called hydrophobic interactions.

Overlooking the too-wimpy-to-mention (in this context) van der Waal’s interactions, the above are the only kinds of non-covalent interaction an introductory biology student needs to understand…. pretty much every type of ‘recognition’ and ‘binding’ there is. That’s an awesome argument for making sure we teach/review these ideas, because it equips students to understand how bases pair, how enzymes ‘bind’ substrates, how antibodies ‘recognize’ antigens, how (your favorite molecule) ‘finds’ (partner of your favorite molecule).

Of course, Rome was not built on a single interaction. A biological molecule is not just a list of its charges and non-polar areas… their 3D geography is the rest of the story. For two surfaces to be truly complementary, not only must they have positives for each others’ negatives, etc… but these must be placed such that many of these delightful interactions can occur simultaneously. 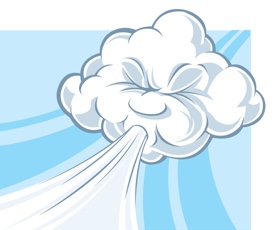 If there are so few ‘kinds’ of stickiness, surely everything must bind to anything. How does anything ever come undone, find optimal partners, why do reaction products un-bind from enzymes? Two words: Brownian motion. This is a huge because it corresponds to nothing in the macro world we’re all used to. Arising from the simple fact that we’re waaaaay above Absolute Zero (the temperature at which nothing moves, at all), the collisions of tiny things (like water molecules) keeps everything in unbelievably chaotic motion. And these collisions tear anything apart that isn’t ‘held down’ by multiple interactions… and everything will come apart eventually.

In order to convey the scale of these motions, here are some numbers provided by Joel Levy in A bee in a cathedral:

Consider an enzyme, for example. If its substrate molecule is present at a concentration of 0.5 mM, which is only one substrate molecule for every 105 water molecules, the enzyme’s active site will randomly collide with about 500,000 molecules of substrate per second. And a typical globular protein will be spinning to and fro, turning about various axes at rates corresponding to a million rotations per second.

So, a few simple kinds of interactions hold molecules together… and one ravening force works constantly to tear them apart. A ‘specific interaction’ is merely one that lasts ‘relatively long’, according to whatever standard we happen to be applying. For a lovely summary, check out this figure from Molecular Biology of the Cell.